On the 15th of June, an Event was held in the Ambassador Hotel marking the official closing of the SDF-funded Capacity Surge Project Phase 2 (CSP2) in Hargeisa. Since November 2015, 130 civil servants from Hargeisa, Las Anod and Erigavo took part in CSP2, a training programme on project management delivered jointly by the SDF Secretariat and the Civil Service Institute. During the Closing Event, the 85 trainees from Hargeisa who had successfully completed the training, received Certificates of Project Management. Separate Events will be held in July for the trainees from Las Anod and Erigavo.

The trainees are from the Ministries of Education and Higher Education, Fisheries and Marine Resources, Health, National Planning and Development, and Hargeisa Water Agency. Recently, some trainees from the Ministry of Energy and Minerals also joined. For the past 7 months, the trainees undertook up to 14 courses in different aspects of project management, such as Monitoring and Evaluation, Reporting, Work Planning, Budget Management and ICT. 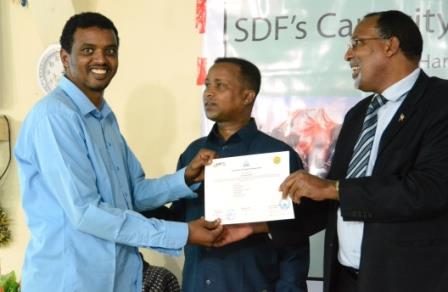 In his opening remarks, the Minister of National Planning and Development, Mr. Ali Hussein Ismail, emphasised the importance of education and training for Somaliland’s civil servants. Similarly, the Director General of the Civil Service Institute, Mr Guled Hagoog, pointed out that the newly acquired skills will enable the civil servants to contribute to improved government service delivery. In his turn, the Chairman of the Civil Service Commission, Prof. Mohamed Mihile Boqoreh urged the trainees to make use of the gained skills and transfer them also to their colleagues who did not participate in CSP2. Angus Miller, DFID / Danida Governance Adviser, explained the background of the Capacity Surge Project and congratulated the trainees, CSI and the SDF Secretariat with completing the training programme in Hargeisa.

After the different remarks, the trainees presented the project proposals which they had developed in the last course of CSP2, showcasing their improved knowledge and skills.

In the final part of the Event, the DFID / Danida Governance Advisor handed out prices for the best attending trainees and Ministries/Agencies, which was followed by the trainees receiving their Certificates.