The Ministry of Water Resources (MoWR) of the Republic of Somaliland today officially launched Gargooray Water Supply Project. The project seeks to improve access to portable water to about 3,600 inhabitants of Gargoray through borehole drilling, construction of water supply system & establishing a sustainable management committee in Gargooray. The project also includes making provisions for watering of animals. 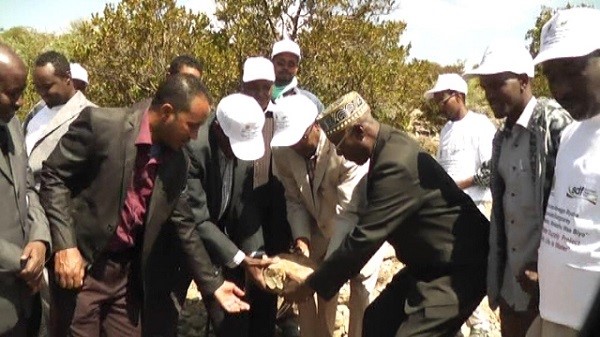 The launching event for the project took place in Gargooray, Boon District in Awdal, on 15th December 2014, and was officiated by the Minister for Water Resources Mr. Hussein A. Abdulle.

Gargooray lies 50km Northwest of Boon district in Awdal region and is nomadic land inhabited by agro-pastoral community. The total estimated population in the area, who would benefit from the new water system, is about 3,600 persons. The area is known for agro-pastoralism, which has worsened in the last three years due to poor rains, which have resulted aggravating the water availability situation. The nearest water points are shallow wells in Xaliima Cade (40km East), Boon district (50km South), Ceelbaxay shallow well (43km West) or Dhabiiley shallow well (55km North). Many of these water points (shallow wells) dry up during the dry season.

Many herds of livestock are lost every year due to dry spells and a great number of pastoralists migrate to towns and villages in search of water and aid. Poor sanitation, water borne diseases and diarrhoea are experienced in Gargoray as a result of poor quality of drinking water. People and livestock of Gargooray overcrowd the nearest shallow wells, which is about 40km away. To make water available nearer the town of will not only improve the health of the people, but also the health of their animals and therefore improve their livelihood.

The project is funded by the Somaliland Development Fund (SDF) and is implemented by the MoWR. The Somaliland Development Fund (SDF) is a 4 - year fund designed to support the Government of Somaliland (GoSL) filling a critical gap supporting projects that are fully aligned to the National Development Plan (NDP). SDF is currently funded by the Department for International Development (DFID), the Danish International Development Agency (DANIDA) and the Governments of Norway and Netherlands. The current contribution by the three donor countries currently stands at USD 60 Million. The MoWR is currently implementing a project worth 5.5 million in seven locations across Somaliland which includes, Barbera (Sahil), Las Anod (Sool), Hadaaftimo (Sanaag), Burao (Toghdeer), Gargooray (Awdal), El Afwein (Sanaag), Fiqifuliye (Sanaag) and Kulal (Sool)