More than 10,000 residents of Ayaha 1 and 2 settlements in the outskirts of Hargeisa city mainly vulnerable Internally Displaced Persons (IDPs) are set to benefit from recently completed Ayaha 1 and 2 Water Supply System project. The project which is funded by the Somaliland Development Fund and implemented by Hargeisa Water Agency is expected to provide 302M3/day of water which will ensure the residents have access to clean and safe domestic water throughout year. 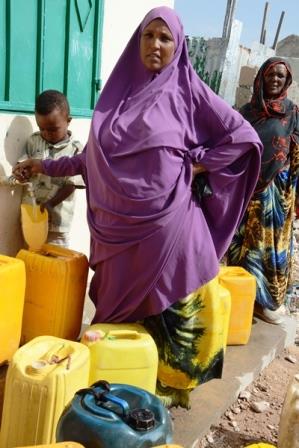 The commissioning was presided over by Somaliland senior officials, including Minister of National Planning and Development Hon. Ali Hussein Ismail Jirde, the Minister of Water Resources Hon. Baashe Ali Jama, the Mayor of Hargeisa Municipality Mr. Abdirahman Mohamoud Aideed and the Chief Executive Officer of Hargeisa Water Agency, Mr Ibrahim Siyad Yonis. The project, which was constructed for a period of one year from April 2015 to April 2016 consisted of laying of 5.1km of pipeline construction of seven kiosks, with 4 outlets per kiosk, and two sets of pumping systems installed at the Haraf filtration gallery.

While speaking during the commissioning of the project, the Minister of Planning lauded the Somaliland Development Fund donors for their contribution in the development of Somaliland.
The Minister specifically said “I am delighted to witness the Ayaha 1 & 2 IDPs getting clean, accessible and piped water before even the rest of Hargeisa received such development. This is the result of the joint effort by Ministry of Water Resources, Hargeisa Water Agency, Ministry of Planning and National Development with support from donor community especially UK, Denmark, Norway and Netherlands whose contribution we are very greatful for”.In the same event, the Minister of Water Resources Hon. Baashe Ali Jama said “The government of Somaliland has put a lot of effort to ensure that Hargeisa which is the capital city and most populated get access to affordable clean water. We are expecting that by early 2017 Hargeisa will get water and together with Hargeisa Water Agency we are committed to looking for funds to construct a Water reservoir for Ayaha 1 & 2 so you will be able to get water throughout the year”.

Talking on behalf of the Project Holder, the Chief Executive Officer of HWA, Mr. Ibrahim Siyad Yonis said that: “Effective from today, residents of Ayaha 1 and 2 shall be able to get safe water. HWA is very grateful to all Donors financing SDF for their support in constructing the system. I call upon all people of Ayaha 1 and 2 Settlements to look after this system very well.”

Other activities funded by the SDF and implemented by Hargeisa Water Agency include:
1. Drilling of 3 boreholes in Hora Hadley as well as laying 6 km of pipeline connecting the boreholes to Geed Deeble pumping station;
2. The procurement of pipes for laying of 23 km of pipeline mains from Geed Deeble to the Chinese Reservoir;
3. Detailed engineering design to supply water to the Southern districts of Ahmed Dhagah and Mohamoud Haybe and the northern districts of Ibrahim Koodbuur and Ga’an Libaah districts;
4. Construction and equipping of water quality laboratory for HWA; and
5. Construction of three subsurface dams to boost the sustainability of the Haraf filtration gallery which feeds the Ayaha 1 and 2 water supply system.