Access to safe drinking water for both human and animal population is fundamental for good quality of life. Pastoralist communities in the Qool Caday grazing plain of Somaliland, have long suffered the lack of a centralized communal water system for human and animal consumption, despite the fact that the topography of the area offers suitable conditions for sustainable water harvesting.

To address this gap, the Somaliland Ministry of Livestock has secured funding from the Somaliland Development Fund (SDF) to implement the Livestock Holding Ground Project. The project supports the construction of water harvesting infrastructure including drilling of two boreholes and excavation of three earth dams, as well as other livestock enhancing support services including the construction of seven animal health and inspection centers.

The project has so far completed two dams and drilled one communal borehole that supply plentiful water to the local community and their animals. Mr. Jama Hassan Omer (see picture above), 63, is one of the many pastoralists who feel better off with the services provided by the Livestock Holding Ground Project in Qool Caday. He now waters his camels from the communal borehole.

“It is a relief for us to have this communal borehole near our encampment. During the worst days of the drought, we had the luxury to water our animals from this communal borehole. Before, there was no such thing as communal, we used to walk long distances and buy water from berkads in Sallahley, owned by individuals. Thank God, this is a total relief”, says Hassan.

Animals were lean and malnourished as a result of the recent El Nino induced drought in the country. Hassan explains that his physically weak camels could barely walk the distances needed to get to water. He embraces the provision of access to safe drinking water for his camels and the community at large near his encampment (see picture below). 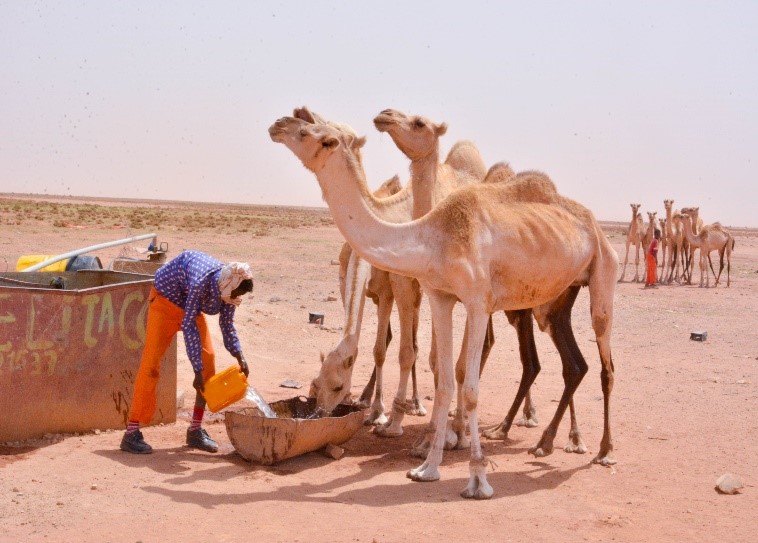 “For animals, best pasture utilization happens when animals do not have to travel far for water. We feel that we are lucky to have this new water facility at such close proximity”, adds Hassan.