The Somaliland Minister of Health, Mr. Saleeban Essa Ahmed, and the Minister of Education, Mr. Abdillahi Ibrahim Habbane, jointly officiated over the launching of the reconstruction of the Las Anod boarding school and rehabilitation of Las Anod regional Hospital.

The ceremony held in Las Anod was also attended by the Sool Regional Governor, the Mayor of Las Anod and other senior government officials. The reconstruction and rehabilitation work of the two facilities is funded by the Somaliland Development Fund (SDF) and implemented by the Ministry of Health and Ministry of Education respectively.

Las Anod is the regional capital of Sool region, in the east of Somaliland. People living in this area are predominantly pastoralists and the region is characterized by poor social service delivery due to dilapidated social infrastructure. 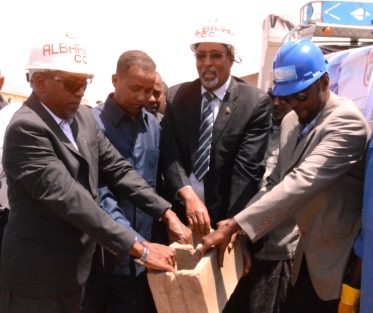 Las Anod hospital is currently barely functional with limited services and as such, the rehabilitation of the hospital will result in its reactivation hence contributing to improved access to secondary health care services for the people of Sool. The project specifically seeks the rehabilitation and re-equipment of the hospital and the reviving of its management systems. On the other hand, Las Anod boarding school has been closed for 25 years and has not received any rehabilitation. The education project therefore aims to improve access to secondary education services for the people of Sool, through the construction and rehabilitation of this school as well as through the re-establishment of its management system.

Speaking at the event, the Minister of Health encouraged the participants to support the smooth implementation of the project. The Minister said: “I request you to help us in working with the contractors to complete both projects in a timely manner”. The Minister of Education added: “The Government is committed to delivering education services. SDF will fund the school operations for the first year, then the Government of Somaliland will take over.”

The ministers mentioned that when the rehabilitation work is completed, both the school and the hospital will be fully operational.

The Somaliland Development Fund (SDF) is a 4-year fund designed to support the Government of Somaliland (GoSL) filling a critical gap supporting projects that are fully aligned to the National Development Plan (NDP). SDF is currently funded by the Department for International Development (DFID), the Danish International Development Agency (DANIDA), the Royal Norwegian Embassy and the Embassy of the Kingdom of the Netherlands. The management of the SDF Secretariat has been contracted to BMB Mott MacDonald, an international consulting company, which is responsible for the management of the Fund on behalf of the Government of Somaliland and the donors. The SDF has allocated funding for the implementation of various activities implemented by the Ministry of Health and the Ministry of Education.