Hargeisa, Somaliland. On 9 June 2015 – a delegation from the Government of Somaliland (GoSL) accompanied by the Somaliland Development Fund (SDF) donors visited the Roads Development Agency (RDA) laboratory to see the equipment funded by the SDF. Later on, the delegation visited Hargeisa Water Agency (HWA) pipe storage facility where recently imported pipes for Hargeisa Urban Water Supply Upgrading Project pipes have been stored. The purpose of the visit was to provide the GoSL and the donors with an opportunity to see recently supplied modern laboratory in RDA as well as the recently arrived 371 container loads with 3,696 pieces of 600mm ductile pipes (slightly over 21km) meant for use in the upgrading of the Hargeisa Urban Water main water pipeline. An additional 124 containers with pipes, valves and fittings are expected during the coming month.  Both laboratory equipment and the pipes are funded by the SDF. 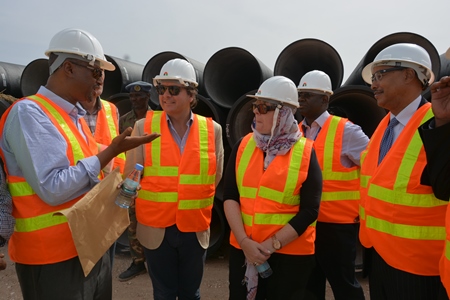 From the GoSL side, the members of the delegation were the State Minister of Finance, Osman Sahardid and Mr Ibrahim Siyad, the General Manger of HWA and Prof Hassan Ali Osman, the General Manager of RDA.  The donors were represented by officials from UK Department of International Development (DFID) and Danish International Development Agency (DANIDA) and the Kingdom of the Netherlands. The Embassy of Norway sent their apologies.

On behalf of the SDF donors, Pauline Seenan, Head of Economic and Human Development Team at the HWA pipes yard said that: “We are happy to confirm the arrival of the pipes in Hargeisa and appreciate the amount of work that was involved in importing them from China, clearing them through Berbera and finally bringing them to Hargeisa. We look forward to coming back and turn on the taps of increased water in Hargeisa city”.

After visiting the RDA offices and laboratories, Pauline said that “It is very nice to be in here and to see the results of combination of two years of work. The SDF is really focused on infrastructure and particularly on roads. We have got two roads and a bridge rehabilitated. It is also good to see all of this equipment which will help in ensuring sustained quality of roads in Somaliland. It is indeed good to see all the SDF work coming together finally and the tax payers money being well spent”

Speaking for the government of Somaliland at both sites (RDA and HWA), the State Minister of Finance, Osman Sahardid said that that ‘’ It is apparent to everybody the progress made in the roads sector specifically the rehabilitation of Lafaruk- Berbera Road, Kalabaydh – Dila road and now the laboratory equipment which will bring a lot of benefits including testing of  road construction materials for the benefits of our roads in Somaliland.  The water upgrading project for Hargeisa is similarly helpful in contributing to provision of adequate accessible water to Hargeisa residents. On behalf of the Government of Somaliland and its people, I would like to thank the government and people of UK, Denmark, Norway and the Netherlands for their contributing to the Somaliland Development Fund and making all this happen”.

SDF has allocated USD 9,928,630 to RDA for roads rehabilitation in Somaliland; namely, the rehabilitation of Lafaruk-Berbera-Sheikh and Kalabaydh-Dilla roads. A portion of this amount was utilised for procurement of the laboratory equipment which are meant to increase RDA capacity for testing of road construction materials (for earth works and Asphalt) for quality control and assurance purposes in both new construction and rehabilitations.

Similarly, the SDF allocated USD 9,503,000 for the upgrading and extension of the Hargeisa Water Supply System; namely the procurement of pipes for the 23 KM of pipeline mains from the Geed Deeble Pumping Station to the Hargeisa Chinese Reservoir, the drilling of 3 boreholes in Hora Hadley, the installation of 6.8km of new pipework between the Hora Haadley and Ged Deeble well fields, the establishment of a small-scale water supply system for Dar-es-Salaam village, and the supply of ductile iron pipes for the upgrading of the Ged Deeble wellfield collector system which connects the new and existing boreholes to the pumping station. These activities are implemented by UN-Habitat. The above stated allocation is also funding the construction of Ayaha 1&2 Settlement Water Supply which is implemented by Terre Solidali.